Starting today we are offering two new RetroBat Emulation Hard Drives to cater our Japanese fans! We’ve received recently a lot of inquiries from fans from Japan about collections catered to them. Many of them have some level of difficulty with the USA and European localized games, and they want to play their classics in Japanese.

Typically, for example, if we can include a game like Metal Gear Solid for the PlayStation, or a Final Fantasy game, it will often be the US version of the game. We feel that this is unfair to our Japanese-speaking friends, and we decided to create the collections that have all these games in their native language on the versions released in their country! 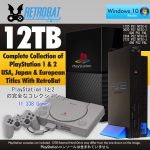 So, by popular demand, we now have a “RetroBat PlayStation 1 and 2 12TB Complete Collection” that includes absolutely all games released for these platforms in all the 3 major regions and also Korea and India. It’s over 11,000 PS1 and PS2 games for everyone to enjoy! However, if you only want games in English, you can still go after our original PS1 and PS2 5TB drive that has only the USA releases and translated games. 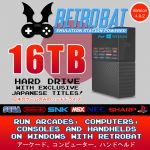 And the most sought-after collection of them all for Japanese speakers only, is our all new “16TB RetroBat Complete Japanese Hard Drive Collection”. It’s all systems released in Japan, with only the titles released in Japan. All these collections are complete, meaning this is the definitive collection for our friends from Japan!

We’ve even customized the theme to have expressions in Japanese to make it even easier for Japanese citizens!

All our previous hard drive collections still stand, so if you only want games that are played in English,

How to Backup Your microSD Card With Retropie

Retropie Physical Collections back by popular demand and some other News!

How to Enable “Favorites” and “Last Played” on Retropie

Welcome Our New Collections By Theme!